KJ’s vision is to deliver peace of mind to our customers who have been in an accident or who trust us to do custom restorations on their dream car. We inspire sound business practices based on honor and integrity. Through leadership and community work, KJ’s strives to encourage those values in others. 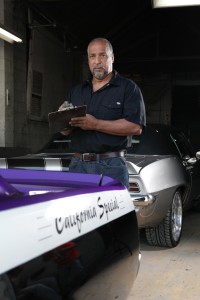 THE HISTORY OF KENNY JOE WALKER

Kenny Joe Walker was raised on the wholesome American values of family, honesty and hard work of the 50’s in small town Harrisburg, Illinois. For Kenny, it all started about 45 years ago, brought up by a family of carpenters, Kenny was no stranger to working with his hands. At age 14, he painted his first mini bike. It was then that he realized his passion for art and design. In the 70’s, he worked on many side projects while his passion was still growing. After school he would custom paint bikes and vans. His ambition pushed him when he found an old 1952 Chevrolet pickup truck rusting in a barn with a tree growing through the bed. Kenny fell in love with the excitement of working metal into design, spraying color on top and the inevitable reward and pride of the finished product.

In the summer of 1980, larger aspirations would take him cross-country. On the 4 th of July, with the fireworks at his back, Kenny jumped in his truck and headed to California on what would become the longest “vacation” in history.While parked outside of Matson’s Auto Body in Oakland, Ca., Kenny’s truck demonstrating his own custom work caught the eye of the owner. Matson walked outside and offered Kenny a job on the spot. There was no looking back after that.

In 1990, after 10 years pumping out custom car after custom car, Kenny decided to strike out on his own and open his own shop with his young wife and family. And now, some 45 years later, his experience, work ethic and creative edge has lead him to consistently do good business and produce excellent work…real work…with great people.